Conv - "the Rest of The Story"

Thurs night opening session was fun and the after party was great, a bit crowded and long lines, but the best part is coming back to your room and talking until 1 or 2 am ... that's when life long friendships are made.  I have such a great friend in Diana Gibbs and I would have never met her if not for Stampin' Up! and my direct recruit Lori, who got her taxes done at the office where Diana worked.  Thank God that Lori signed Diana up and brought us together!

I have been blessed to be an upline to her, she has expressed thanks to me many times for being a mentor and inspiring her.  I always wonder how since I do not earn the cruise or any top company awards, but I am glad that something I am doing is helping her.  I'm happy to say that seeing her achieve such success in her business is very gratifying.  She tries new things, she works hard and works daily, she supports her family, she is very consistent and very determined.

Probably my highlight for Friday was the Awards Night and seeing her recognized for so many things!  Personal Sales, Recruiting, Achievers Bonuses, and earning Founders Circle (Top 100 Demo's in USA).  And one day I just know that I will be in full on tears when they announce her for Advisory Board -- the highest honor to work with the company on future policies, products and plans.  Keep your eye on the goal Diana and you'll get there!  All in time baby, all in time! 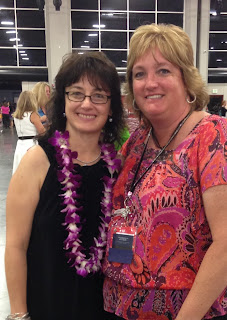 The REST of the STORY --  I sat by her side all during the Awards Ceremony while she sat in pain that had kicked in just before dinner and seemed to be getting worse as the hours went by ... as soon as the awards ceremony was over we bolted back to the hotel, changed clothes, grabbed a few things and headed to the Salt Lake City Regional ER.  Thank Ed & Ellie for driving us and waiting and driving us back and feeding me dinner!  She was confirmed to have a kidney stone and we left and got her prescriptions at 2am at the closest 24 hr Walgreen's ... and back to the hotel ... think it was 3 am or so when I went to bed.  We missed the after party but hey, what'ya gonna do?

Saturday was the final day and it was a mix of general sessions and classes.  I was recognized for my 15 Years with the company and did my Anniversary March since it was in the morning and Di was still in bed going to sleep and rest.  She didn't want me to miss since this was my year to walk.  So I did find my sweet friends Marlene and Kim, so here we are ready for our walks! 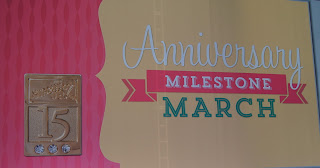 Another fun part of convention is PRIZE PATROL and it's been awhile since I won at an event, so it was nice to be the lucky winner during morning session -- some buttons, a spool of new ribbon, and it's a snowman stamp set, how fitting! 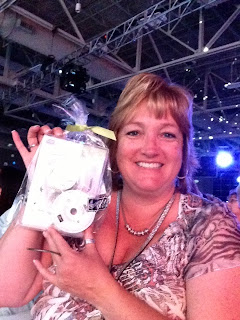 On my way to grab our lunches, look who I ran into!  A table full of special INKin All Night! gals, so nice to see them together!  Veterans & First Timers!! It was very hard for me this year to spend enough time with the group as a whole so it was nice to know they were all having fun and together themselves at times! 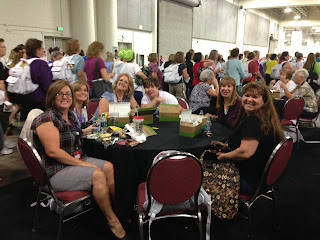 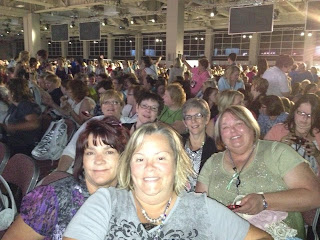 I snagged this picture from one of my gals, it makes me happy even though I wasn't sitting with them!

Saturday was honestly a blur, so little sleep and feeling anxious on how Di was doing.  Do I go back to the room, or give her her privacy, call to check on her or will that wake her, let her rest but dang she's not answering my texts ... oh what to do??  So many people stopped me asking about Diana and how she was, sending wishes and hugs, it was so nice to see 'concern and care' in action.  She is so famous from her blog and presenting at many events, I now know what she feels like getting stopped every few feet!  I guess I didn't realize how many knew me, guess I am a sidekick after all these years!

We had break out classes in the afternoon and you attended whichever ones interested you the most.  I made it to a couple.  Then it was closing session and convention was over with a bang! Did I say Bang, yes I did!!

I ran back to the room and Di was not doing too well.  Not sure if it was the stone or the meds but she wasn't feeling well and we had a flight (or so we thought) the next day.  So this time we went to the hospital (a different one than the ER).  They gave her meds and an IV and then a bit later they said they were going to admit her overnight and do surgery to remove the stone.  It was the longest night of my life I think!  I think the night nurse said I might have slept 1.5 hours total.  I was awake every time she came in the room.


There was so much running through my head... calling her hubby and messaging with her sis in Canada, answering a gazillion texts from caring friends and downline and teammates was the easy part.  What about our flights which we already were checked in for, the hotel which wasn't packed up, do I stay, can I stay, where do I stay, how to get her home, what if there' complications, ...  and oh wait, I haven't eaten?  dang!

Anyhow, BREATHE, call Jeff her hubby (strong, no tears), then call my hubby Dave (scared and tears!), then call airline, then call hotel, then start over with her hubby to tell him I'm staying and will be with her to get her home, then call mine back to relay confirmed plans.  oh, dinner?  yep, Lorna Doones and Fig Newtons from the night nurse!!

The next morning was surgery but the hardest part of the day was signing the paperwork to be her emergency medical consent person (whatever that term is officially called).  It just kind of hits your heart when you know you're in charge of your best friends decisions if something goes wrong... what me?  that's her hubby's job, how well do you know your best friend?  Well again, what'ya gonna do?  Thankfully I was able to sit in silence during her surgery and the only comments from the DR was ""it went great, she's in recovery!""

I start the cycle of calls to Jeff, then her Sis Jacquie, then my hubby, then the friends ... and by the time I was only part way through texting back friends they were already wheeling her back to her room.  I was like, wait I haven't eaten or got a nap yet?  Once she was settled, the day nurse came and grabbed me and said, honey come with me.  Took me down the hall and said, sleep!  I set my phone alarm for 3:30 and slept an hour and a half, because Pam Morgan (VP SU!, super cool gal) had called me earlier (say whaaat!) and wanted to come by at 4pm.  Can I just tell you that that 1.5 hours felt like about 10 hours of sleep!!


Pam, Rich and his wife Wendi stopped by to say hello and check on Diana, as they had a few SU! demonstrators that were unfortunately spending part of their 25th Anniversary Convention experience in the local SLC hospitals.  Not really the highlight you'd expect but it was so nice to see them reach out to her (us) to see if she (we) needed anything at all.  Luckily later than evening she was released and we headed back to the hotel.  We grabbed some food (btw nothing is open at 8pm downtown SLC on a Sunday night!) so room service it was!  Grabbed a shower and then a friend of Di's from Canada stopped by to say hello ... and we chatted in our jammies til who knows when!  Slept in and packed up, and headed home!!


NOW, you know the rest of the story ... an insiders view to Diana's hospital stay ...  oh did I say that her hubby greeted us at baggage claim with a Red Rose for her and a pink one for me!  And his HUG said it all!  And Jeff even thanked Dave (who I had come get me, even though Di wanted them to drive me home) for letting me stay with her.


Best part of Stampin' Up! ...?   Friendships - life long, true, do anything for ya kind of friends, glad to be one, glad to know I have some out there too.


Tomorrow we will resume with stamping and projects!!!
Thanks for listening!
Rhonda
Posted by Rhonda Morgan at 1:16 PM

Rhonda I've said it before but after reading this it's a must I tell you again "You're The Best" I Love You!! You deserve the BFF title!! :)Tracy Altemose

Now that I am home (from your house), I can comment. I love you so much and am blessed to have you in my life. God knew what he was doing when he brought us together. I could never have gone through all this without you being there by my side.
Jeff already loved you and this made him love you even more! Dave is the best for letting you stay with me even though you had club Monday night. Thank you for EVERYTHING!!!
I love you bestie!!
~Di

Bless you Rhonda.....tears streaming down my cheeks........it IS true --the sill little rubber stamp brought us together .but it's the HEART which keeps us beating together.. hugs, Barbara

Popping over from Diana's blog to say what an amazing friend you are! You are blessed to have each other :-)

True blue friend that's what you are. Thanks for taking care of our Diana.

I'll say it again, Thanks so much for staying with Diana. It is so hard being so far away when things like this happen. She is blessed to have such a great friend. I'll give you some big hugs in October!!!!!
Jax

Thanks everyone, I think it was just a way to finally let it out. Thanks for reading and for your kind comments!

You're amazing Rhonda! :) I can't wait to meet you someday! :) What a blessing it is to have friends to stand beside us like this! 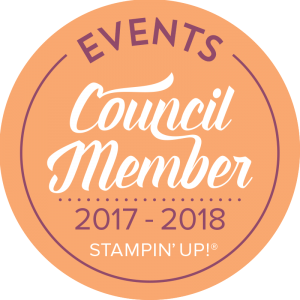